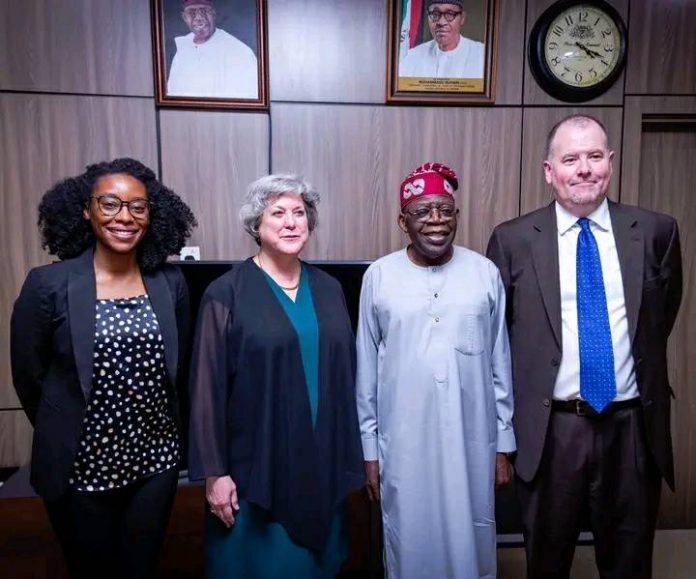 Last week, US Ambassador Mary Beth Leonard and US Political Adviser Rolf Olson paid a visit to the APC presidential candidate at the party’s presidential campaign office in Abuja.

The visit which was part of the US government’s efforts toward strengthening its relationship with Nigeria ahead of the general elections obviously did not trend in some quarters because of the obvious implications.

For some time now, opposition parties have been carefully smearing the image of the Jagaban in order to discredit him in the eyes of the electorate. The notion that Tinubu is a drug baron wanted in the United States and cannot step foot on US soil has been thoroughly demolished by this noble visit by none other than the US ambassador and US Political Adviser themselves.

Without a doubt, the visit exposed the deception of those who are hell-bent on downplaying Tinubu’s achievements and instead cooking up or sort of tales against the first-class graduate of Chicago State University. Tinubu, who retired as a top Mobil executive, has once again proven the maxim by the great Winston Churchill that “you will never reach your destination if you stop and throw stones at every dog that barks.” He keeps on moving… “The lion does not turn around when the small dog barks.”

Is it possible that in your wildest dreams a man who is allegedly wanted for crimes in the United States would be visited by none other than a serving ambassador ?

An ambassador is a high-ranking diplomat who represents a state and is usually accredited as the resident representative of their own government to another sovereign state . This means that the US ambassador to Nigeria is the representative of Joe Biden, the US president, and has same immunity in Nigeria.

If I may ask, is it possible for US diplomats to pay a visit to the infamous cop, Abba Kyari, and then pose and take pictures with the alleged criminal while opening their thirty-two teeth? But hatred, the opposition’s stock in trade, would not allow them to think clearly, and this time they have formed BLIND AND DEAF to the obvious truth.

The sooner the opposition understands that Tinubu is far too big for their antics, the sooner they will find peace. Look at the photos below to see the ecstatic expressions on the US diplomats’ faces, which have undoubtedly made some guys green with envy.