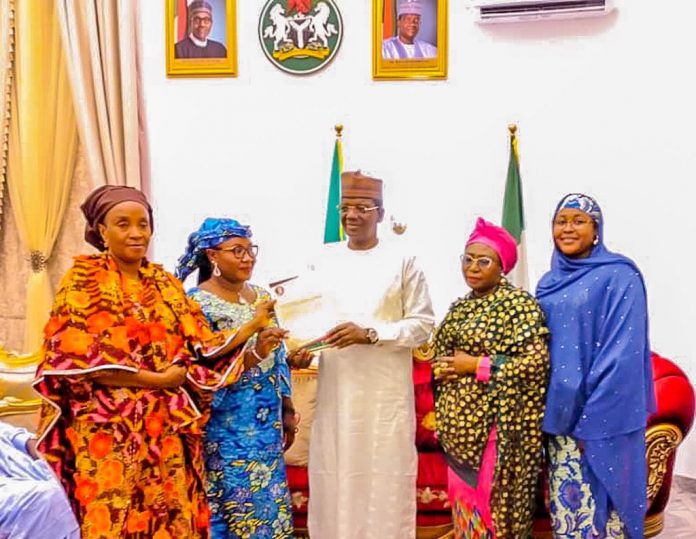 She represented the National Coordinator of Women wing of the council, Ronke Soyombo who is also the Special Adviser to Ogun state on Education.

Receiving the delegation at Government House Gusau, Gov. Matawalle extolled the contributions of the council in general and women in particular towards mobilizing support for the presidential candidate of All Progressives Congress, APC Bola Tinubu and his running mate, Sen. Kashim Shettima.

Matawalle who is the North West Zonal Campaign Coordinator of the APC Presidential Campaign Council pledged the readiness of his office to support the activities of the council under the leadership of the National Director General, Amb. Seyi Bamigbade in ensuring a massive victory for APC in North West, not only for presidential election but all elective positions in the zone.

Earlier in her remark, leader of delegation and North-West Zonal Coordinator of Women Wing of APC Professionals Council, Hon. Larai Sylvia Ishaku thanked the governor for expanding the frontiers of good governance in the state through massive infrastructure development, human capital development as well as inclusion of women in governance.

Hon. Ishaku, who is the APC flagbearer for Jaba constituency of Kaduna Assembly highlighted that women wield intimidating electoral value which he said she is poised to harnessing to ensure victory for Bola Tinubu and his running mate, Sen. Kashim Shettima in the February 2022 presidential election.

She briefed the governor on what the council stands for as well as its activities in the zone.

Hon. Ishaku also hinted the governor on the upcoming inauguration of executives of women wing of the council in the zone and empowerment of seven thousand women across the seven states of the North-West, a campaign targeted at granting women access to economic opportunities to women.

The coordinator further presented a detailed document of the council and year round events to the Governor, assuring him of the council’s unwavering support and efforts towards the actualisation of the Tinubu-Shettima Presidency in 2023 as well as the success of all other APC flagbearers in various elective positions.

Those in her delegation include, the Director Contact and Mobilization of women wing of APC Professionals Council in North-West and a two-term member House of Representatives from Kebbi State, Hon. Halima Yauri, Women Leader of the Council in North-West, Hon. Aisha Adamu and Coordinator, Kaduna State women wing of APC Professionals Council, Hon. Majida Muhammad Sani